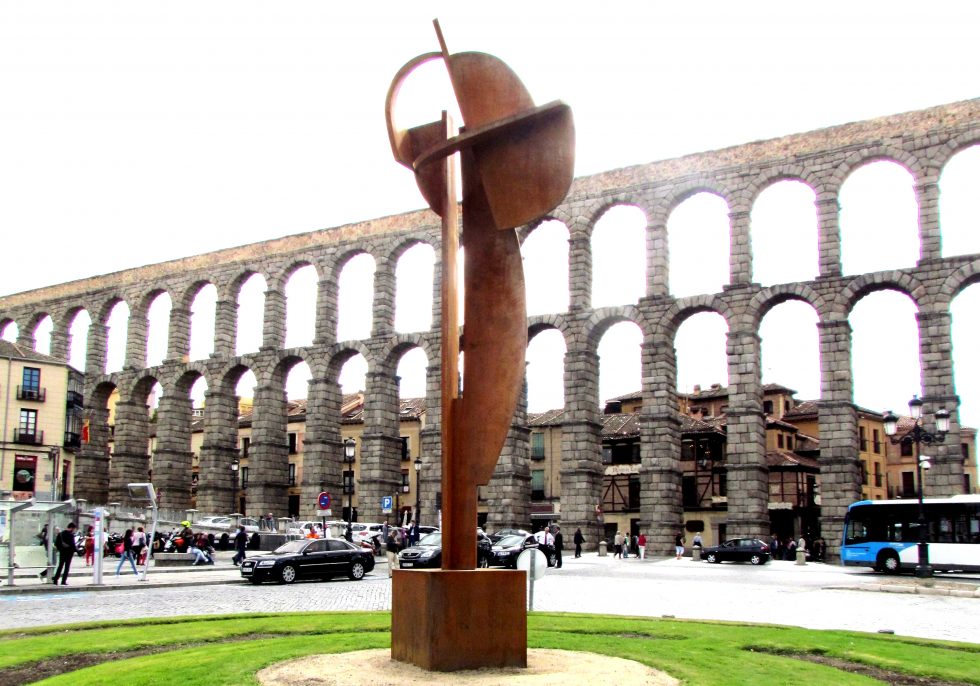 Outdoor sculpture exhibition, inside the program of ” HayFestival”, Segovia 2016.

In his eleventh edition the cultural and literary meeting “Hay Festival”, it takes pleasure in presenting a monographic exhibition of works in great format of the sculptor Carlos Albert (1978).

In previous editions they were works exposed under the art curating of the Marlborough Gallery from Madrid, with authors as Martín Chirino, Francisco Leiro, Antonio Lopez,… but also Agustín Ibarrola or Xavier Mascaró did it of solo exhibition. In this occasion, the shift is for Carlos Albert who comes to “Hay Festival” to present his work. In spite of his youth, the work of this sculptor from Madrid has reached international recognition, giving to his work a personal stamp in the one that it adds to traditional elements as the wrought iron and the cortén steel, the space as support that allows him to realize imaginary outlines that complete the piece; what he defines like to draw in the air: to create the part of the work that one does not see. The rotundity of the visible thing and the invisibility of the suggested shape and balance his work.

The exhibition consists in twenty works, many of them unpublished, which are distributed inside the most beautiful place of the “Marquess’s Garden of Villena” in Segovia. Close to the Gardens of the Romeral of San Marcos and afoot of the great Alcazar, the place is in the bank of the river Eresma, giving content to big trees, small meadows and intimate spaces in which the steel sculptures and wrought iron are, with his forms and ochre colors, they join harmony with the environment. Since it could not be otherwise, also there is space for an elegant ornamental garden that beside delighting the walker, serves as point of inflexion between the nature and the urban order imposed by the man in the city across the centuries. To finish, opposite to the emblematic Aqueduct there places “Watchtower”, the work of major importance that with more than 6 meters of height and a ton of steel, has turned into the banner of the event.

According to the program, on September 23 at 11:00, Albert will bring over the process of his work in a workshop of sculpture that it will give in the nearby forge of “La Real Casa de la Moneda” of Segovia later to inaugurate officially the exhibition to the 13.30. This one will remain opened, at least, until the next October. Also on September 23, 18:00h there will be given them a chamber concert  by the Prosegur Foundation in collaboration with the Albéniz  Foundation, and interpreted by the School of Music Reina Sofia pupils. It will be in the own environment where the sculptures are exposed.

The sculpture "Ágora", made of corten steel and more than 4m high, has been permanently…