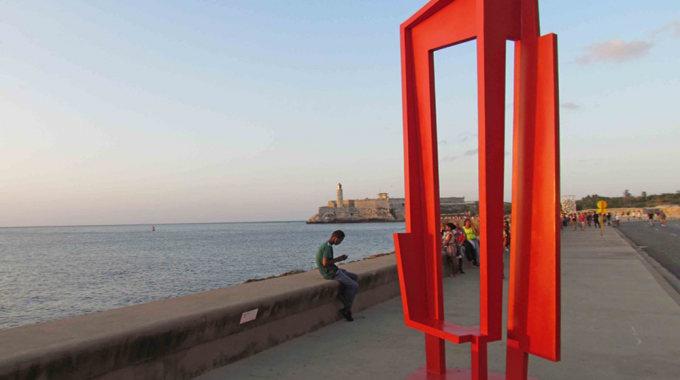 The sculptor Carlos Albert (Madrid, 1978), after his intervention in art fairs in Spain, Germany and Belgium, participates this year in the “13 Bienal de la Habana ” in the project “Detrás del Muro”. The Bienal de La Habana, the largest visual arts event in Cuba, is celebrated in its 13th edition, from April 12 to May 12, 2019.

Albert will present his work “Marco de lo Invisible”: piece of 4 m. height, in corten steel with a high resistance paint finish of a bright red colour, characterized by the roundness of its volumes in dialogue with the enigmatic voids, which structure the space as an essential part of the sculpture itself.

Proposal that, at the same time, creates awareness and poetically highlights the emotional sense that implies facing the set of realities of our human condition, that equals us, brings us closer and joins us, regardless of differences. “Marco de lo invisible” generates an intimate reflection in the viewer, inviting him to reach his own thought and an emotional attachment, beyond the physical reality of the work.

The artist has been chosen to participate in this project, in collaboration with Acción Cultural Española and La Oficina del Historiador, with the purpose that the piece remains in the city permanently. Another act of consideration, which fits its visibility on the international scene, after its presence in Germany, Vietnam, USA, Belgium, Italy and Portugal.

Dear friends;   In the next days it will take place the opening of the…